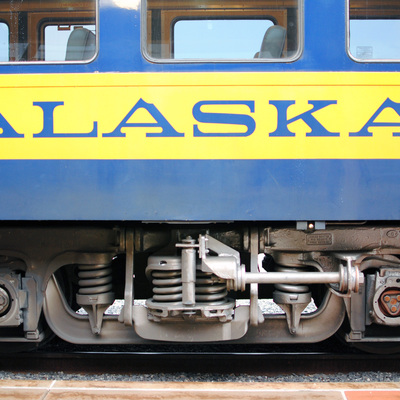 I had never been on a train before, at least as far as I could remember. I was pretty pumped to get the day started (and to get the hell out of Fairbanks).

Even in the "Adventure Class" (the train company's clever way of saying you're poor), the train ride was substantially more enjoyable than the plane ride, for at least these reasons:

That being said, I'm glad we started in Fairbanks. Not just because it's a weird place, but because the scenery from Fairbanks to Denali was the most boring of the three train rides.

Of course, when you live in Ohio, saying the most boring about something in Alaska is far from it actually being boring.

So we enjoyed the train ride. We ate some breakfast in the fancy dining car, and I continued to dig into Bossypants. That seemed to please Katie, who's been trying to get me to read that book for years. 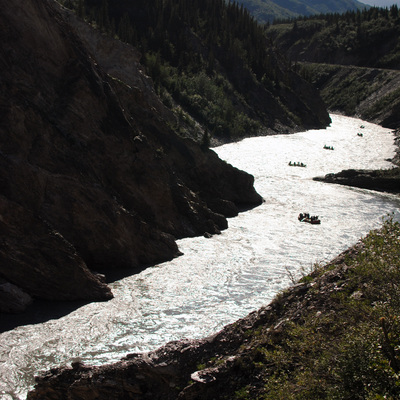 After searching for a few minutes, we found the shuttle we needed to take to our cabins. It turns out we were actually already in the park, but still several miles from our cabins.

We had a good chat with the shuttle driver, as we were the only ones in the cabins who he was transporting at that time. We learned a little about the park. We also learned how people from all over the country will spend their summers doing odd jobs around Denali National Park, just because they love it so much. This kid from St. Louis was one of them.

Another cool thing about Denali National Park is that there aren't many cars in the park, but we'll get more into that in a bit. Because of that, getting around was tough. We had to check in, drop our stuff in our cabin, and get back in the shuttle before the driver finished his break.

We made it in plenty of time. Enough time to ask the lady at the front desk for some advice on seeing the park, since we had the entire next day. Not loving the prices, we didn't book anything and headed into the park.

WARNING! You're not going to read me say anything negative about Denali National Park. If it sounds negative, it's really just less positive, because that place is amazing!

Denali National Park is unique among our official national parks in the way it handles personal vehicles. There are other parks that have driving limitations, but I don't recall any with readily accessible roads that won't let personal vehicles in.

Denali National Park is six million acres of protected land. Yes. Six million. And yet, there are only 90ish miles of road in the park/preserve, and most of it is unpaved, without guardrails and barely wide enough for two cars.

I could talk forever about why this is the case, but you can read more using the link above (or here) if you're interested.

My point here is that this park does not get overcrowded with people because you have to take a paid bus ride to get further than a few miles into the park. And the places at which buses stop are predetermined and unchanging.

The shuttle from the cabins took us to the Visitor Center, which, it turns out, is right next to the train station. So, we were back where we started, but this time bag-free. 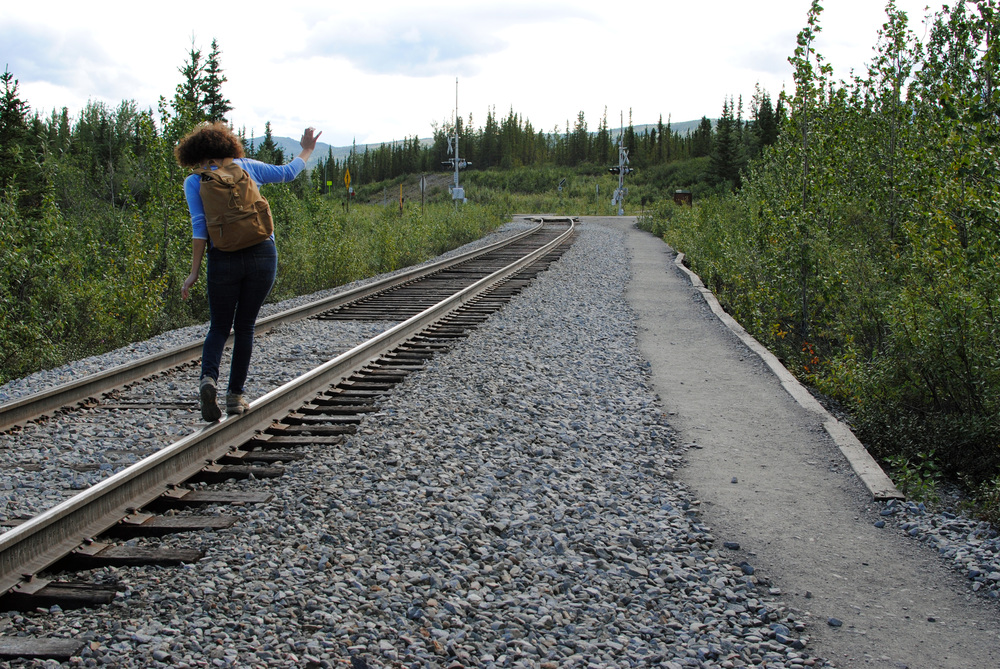 Since it was going to cost a pretty penny to get much further in the park, we bought a bear bell, a water bottle, and some snacks. Then we headed out for a short hike.

We spent the afternoon walking, talking and sketching. Well, Katie sketched, while I played with the camera.

It was nice to finally be out of vehicles and smelling the fresh air. 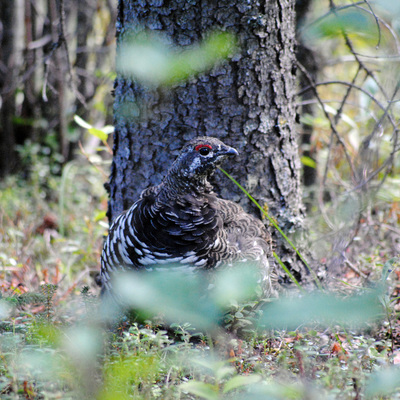 We came back to the Visitor Center a couple hours later, but still had some time to kill before the shuttle came back for us. So we grabbed a couple beers and just sat. We smelled the air. We watched the old people. We looked at the mountains. Life was good (and it still is).

While we sat, we decided what the next day was going to hold for us. We finally settled on paying the money for the tour run by the cabins (Denali Backcountry Lodge). It was the same price as the National Park Service's tour, but it went further into the park. And, as you'll soon learn, it was perhaps the best money we spent the entire time.

The rest of the evening was somewhat uneventful. We were still feeling the jet lag a bit. So we signed up for the tour, hit up the restaurant associated with the cabins, and called it an early night. This was also the night I began my search for the best Fish 'n' Chips in Alaska, although I didn't know it at the time, I may have eaten them that night.